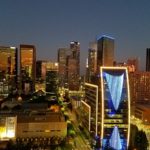 Errol Spence Jr. knocked out Carlos Ocampo at The Star in Frisco. His next fight should be against the winner of Shawn Porter/Danny Garcia fight in August. After that…Terrence Crawford?

The Dallas City Council approved $22 million to help in the redevelopment of Red Bird Mall. Nine years ago this month, I wrote an article for D Magazine with ways that Red Bird could be saved. I think my 2009 self would say that Peter Brodsky is on the right track.

The Incredibles 2 scored a record $180 million opening weekend. I checked it out Saturday morning and thought it was really good, just a beat off from being great. Brad Bird’s direction wasn’t as flawless as the first go around, but he was great again as Edna.

Ryan and I interviewed John Bisio of Walmart and talked about the company’s community engagement.