What a pitiful shame the Cowboys are right now.  They are obviously bad at quarterback, but the offensive line was horrible.  And anyone who used the term "Doomsday III" to describe the Cowboy defense should forego his or her right to talk football the rest of the year. 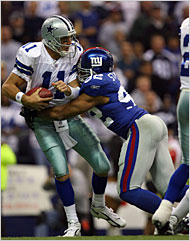 Like the Philly game, the Giants allowed the Cowboys to hang around way longer than they should have been.  But the 2nd of 3 Tony Romo interceptions really sealed the deal. The Cowboys were driving in the 4th quarter with a chance to cut the New York lead to 3 points prior to Romo gifting the ball to the Giants on an attempted screen.

The Bill Parcells Era of the Cowboys is looking pretty pedestrian at this point.   The Cowboys are 28-26 since he took over in 2003, and lost their lone playoff game.  Not exactly the 15-33 record Dave Campo compiled, but well below the expectations of Cowboy fans and Owner/G.M./Check Signer Jerry Jones.

Parcell’s love affair with players he's coached in the past (Vinny Testaverde, Dan Campbell, Ritchie Anderson, Keyshawn Johnson) may have gone too far with Drew Bledsoe, who he pulled in the 2nd half in favor of Romo.    It's still amazing, the most successful quarterback in the Bill Parcells Era: Quincy Carter.

The coach apologized to the fans that suffered through Monday Night’s miserable display.  On behalf of the fans, I accept The Tuna's apology…this time.