James Rucker, Color of Change: The Jena 6 are Free, How we made it Possible

I wanted to share the contents of an email sent out by Color of Change Director of Grassroots Mobilization, James Rucker, to their massive member list regarding the plea of “No Contest” by the defendants in the “Jena 6” case late last week. Color of Change was at the forefront of the internet movement to secure justice for the young men back in 2007.

I’ve had a chance to correspond with James and meet some of the Color of Change staff.  They are utilizing 21st century tools to combat injustices that have persisted for generations.  It’s cool to see that they haven’t just rested on their involvement in Hurricane Katrina justice and with the Jena 6, but continue to stay engaged, even taking the fight to Fox News.  They remain relevant and functional as many such organizations have the tendency to fall off into the abyss of irrelevancy.  Kudos to C of C.

Friday, nearly two years after more than 320,000 of you stood up to protect them from Jim Crow justice, the Jena 6–Jesse Ray Beard, Carwin Jones, Robert Bailey, Theo Shaw, Bryant Purvis and Mychal Bell–are all now free to move ahead with their lives. We should all be proud.

The five remaining Jena 6 cases were brought to conclusion on Friday1 when Jesse Ray, Carwin, Robert, Theo, and Bryant pleaded “no contest” to misdemeanor simple battery charges.2 They will spend no time in jail, serve seven days of probation, and pay relatively minor fines and court fees. 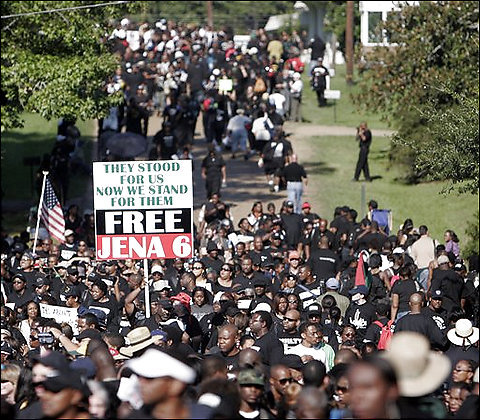 It’s an incredible outcome given that the young men were originally charged with attempted murder in small-town Louisiana and had neither the funds nor the connections to get high-quality representation or attention for their cases.

Luckily for the Jena 6, hundreds of thousands of you got involved, and the power of your participation changed the game. An amazing team of lawyers worked tirelessly to achieve Friday’s outcome. Our staff helped recruit them, and your financial contributions–over $275,000–provided the bulk of the funds for their work. Jim Boren, the coordinating attorney, said this about ColorOfChange members’ contribution: “None of this would have happened without you.”

But it wasn’t just lawyers and money. Over 300,000 of you wrote to Governor Blanco and District Attorney Reed Walters. On September 20th, 2007, more than 10,000 of you went to Jena. Members who couldn’t make it to Jena held more than 150 rallies and vigils across the country, and made more than 6,000 phone calls to elected officials in Louisiana. And a few weeks later, ColorOfChange members sent almost 4,000 complaints demanding an inquiry into the DA’s actions.

Your actions offline and online helped put Jena on the map and resulted in critical coverage in every mainstream news outlet. You started a movement that made it impossible for Louisiana officials to support the status quo.

Today we offer congratulations to these young men and their families, and we say thank you to the entire ColorOfChange.org community. We’re also so thankful to the attorneys who took these cases but chose to stay out of the limelight. They and several others3 are the unsung heroes of this story.

While this is a great moment, it’s important to remember that if it were not for the extreme nature of this case, most of us wouldn’t have known about it or gotten involved. The reality is that there are countless Jena 6’s: young people–often Black and male–who are overcharged or unduly criminalized, and whose plight is unknown to most of the outside world.

Even in the case of the Jena 6, we need to take stock of what did not happen. While Judge JP Mauffray was taken off the case due to the appearance of bias (a pivotal moment for the cases), District Attorney Reed Walters–the person largely responsible for the problems in the first place–still has his job.

It’s the reason our work cannot just be about identifying and fighting for individuals railroaded by the system, but about creating systemic change in criminal justice in America. We are truly grateful to have the chance to do this work with you, and we’re hoping for your continued engagement and support.

— James, Gabriel, William, Dani and the rest of the ColorOfChange.org team
June 28, 2009

Help support our work. ColorOfChange.org is powered by YOU — your energy and dollars. We take no money from lobbyists or large corporations that don’t share our values, and our tiny staff ensures your contributions go a long way. You can contribute here:

3. Thanks are due to Alan Bean, Tory Pegram, and King Downing, who dedicated months to working with the families and getting the story out, and to our friends at the Southern Poverty Law Center who played a central role in putting together and supporting the legal teams. Without any one of them, our work would have been hampered, or in some cases not possible at all.