Remember President Obama’s speech on race (A More Perfect Union), at the National Constitution Center in Philadelphia when he was running for President in 2008?

Where has that guy been for the last couple of years?

I tend to blame President Obama’s advisor’s for his in ability to inspire the country during these tough times.  He has to take responsibility for his part in creating a team where nearly everyone either went to Harvard or is from Chicago.

Visit msnbc.com for breaking news, world news, and news about the economy

But in Osawatomie, Kansas, at least for today, the President recaptured some of the magic  that defined his run for the White House. He challenged his Republican haters without demonizing them.  He focused on how we’re more alike (i.e. suffering financially) than different.  And he used America’s past, this time a speech by Teddy Roosevelt, to look towards America’s future.

The reaction to the speech has been largely positive, like this excerpt from an editorial about the speech.

After months of Republican candidates offering a cascade of bad ideas about the economy, President Obama’s speech in Osawatomie, Kan., Tuesday came as a relief. He made it clear that he was finally prepared to contest the election on the issues of income inequality and the obligation of both government and the private sector to enlarge the nation’s shrinking middle class.

Of course it will take more than the oh so important teleprompter to win over independents between now and next November.  So much of what’s been lacking lately is confidence.  Confidence in institutions, confidence in legislators, confidence in the executive branch.  Today the President was able to capture the moment and frame the debate.

The President hasn’t been out-idead by the right, he’s been out messaged.  The Democratic Party has not a clue when it comes to messaging as they are the party of 50 or so issues, with every constituency ready to jump ship our sit out 2012 if their demands aren’t met.  With today’s speech, the President took hold of the Bully Pulpit made famous by Teddy R., which is a good sign for his 2012 Presidential campaign. 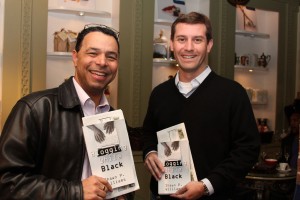 Neil Foote and Aaron Tobin with their copies of Blogging While Black.