For the next two weeks I’ll pop up on various sites across the web participating in interviews for Blogging While Black.  It’s part of a two week virtual tour to go along with the December/January tour dates I mentioned a few weeks ago.  Here are some highlights of today’s interview with SMU’s student newspaper The Daily Campus conducted by Brooks Igo.

Q: You talk extensively about the advantages of being in the blogosphere from 2007-08. Were there any disadvantages bloggers had compared to other news sources?

A: It was a great time to get into the blogosphere. There were 30 credentialed bloggers for the 2004 Presidential Election; they were cutting edge early adapters. But we were still early. We had an advantage because we were still early adapters. If there was a disadvantage, because it was so early, people didn’t look at blogging as a credible source still. People were saying, “These are just bloggers.”

Q: Why do you think there was such a fall off in the black blogosphere after President Obama’s election?

A: The technology. One of the only places you could go online to hear about these stories were these blogs. Facebook was just starting to come off of college campuses and people my age were just beginning to get on Facebook. Conversations we were having on blogs began to happen on Facebook and Twitter. You didn’t have to go to blogs, you could see these stories on your friend’s Facebook wall.

Q: Can we expect a return?

A: There has to be an evolution. Some of the folks I met back then were recently featured on CNN’s “Black in America” special. People are trying to reinvent advocacy. This might come in the form of app development, making more inroads in mainstream media, or creating alternative forms of media. Everything is going to look different and I think it is important that African-Americans find a place in this social media/technology mash-up.

Q: What was it about the Paris, Texas and Jena 6 story that set the black blogosphere on fire?

A: It was timing. One of the headlines was “14 year-old gets 7 years in jail for pushing down a hall monitor.” When you see that or hear that it just sounds wrong. Even when people dug deeper, there was still something very wrong. This was not a new feeling for African-Americans, but the blogosphere was a new outlet for African-Americans to share their voice. Those cases were like cases that happened before, but there just wasn’t a place where people from around the world could get together and seek justice.

Check out the rest of Brooks’ interview at The Daily Campus. 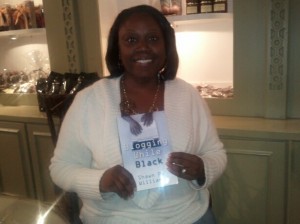 Renee Hartley at Chocolate Secrets with her copy of Blogging While Black. Renee is featured in Chapter 2 as well as in Chapter 9 as a "Breakthrough Blogger."