1) “Investing in early childhood initiatives” like Head Start;
2) “Encouraging better standards and assessments” by focusing on testing itineraries that better fit our kids and the world they live in;
3) “Recruiting, preparing, and rewarding outstanding teachers” by giving incentives for a new generation of teachers and for new levels of excellence from all of our teachers.
4) “Promoting innovation and excellence in America’s schools” by supporting charter schools, reforming the school calendar and the structure of the school day. 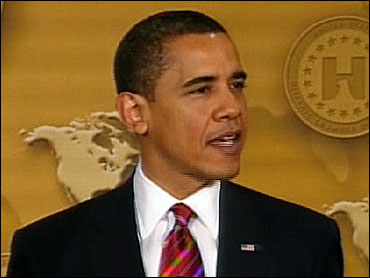 The President also had a word for students. “Of course, no matter how innovative our schools or how effective our teachers, America cannot succeed unless our students take responsibility for their own education,” Obama said. “That means showing up for school on time, paying attention in class, seeking out extra tutoring if it’s needed, and staying out of trouble,” he went on to say.
Obama highlighted the to raise expectations in education because “”By 2016, four out of every ten new jobs will require at least some advanced education or training.”
The President also framed his words in the context of the economy and other bold initiatives his administration has taken on:

I know there are some who believe we can only handle one challenge at a time. They forget that Lincoln helped lay down the transcontinental railroad, passed the Homestead Act, and created the National Academy of Sciences in the midst of Civil War. Likewise, President Roosevelt didn’t have the luxury of choosing between ending a depression and fighting a war.

In his remarks, Obama condemned both Democrats and Republicans for their resistance to innovation in education. “The time for finger-pointing is over,” said the President.
Read the President’s remarks in their entirety here at CBS.com
Photos by Charles Dharapak (AP)